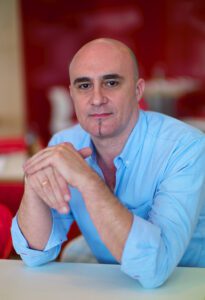 I learned few things in my life and one is that people don`t change, they become who they are.

When I was a kid I have always been intrigued by technology and design, spending a lot of my playing time dismantling things to understand how they were made or to imagine and to build new one, and throughout all my life journey, till now as a grown man, nothing has fundamentally changed, except the complexity and the size of the things that I have designed and built.

Also, the enthusiasm for a new idea and the excitement to bring that idea to life has remained the same as when I was a kid and I believe it will forever be like same, that is probably called passion.

Professionally, I have started my journey quite some time ago, around 1995, working for a company named GEBEL based in Italy in a town called Pesaro, designing and building discos and night clubs in Italy and many other countries from north to east Europe.

Those were certainly years lived at full speed with the euphoria of youth, but certainly also the most important years professionally because I had the opportunity to work very much abroad and that experienced shaped my personality and the choices I would have taken for my future.

Well, there was also another very important event that took place on those years which was to know the person who was my mentor, Ivano Innocenti, who taught me a lot of what I knew of this profession.

He is a great person, and I consider myself very lucky when, at the end of my experienced with that first company, around 1999, he offered me to work in his studio as an associate.

Certainly, with Ivano there was an excellent relationship, the chemistry was perfect I should say, so the years spent working at his firm were very pleasing from a personal perspective and very rewarding professionally.

But the imprinting I had during my first experiences abroad had been very strong and the desire to return to work abroad had never left me, somehow, I was just waiting for the right opportunity.

And like Jagger says “You can`t always get what you want, but if you try sometimes, you`ll find, you get what you need….”, and I got it!

Around 2003 an old friend of whom I had lost track years before came back in Italy for vacation and during a dinner telling me about his life told me that he had moved to Dubai and had opened a Design and Build company.

At that time the world was talking about Dubai and all the great and futuristic projects that were taking place and obviously I made him understand that I was attracted by the idea of ​​being able to be part of that if I had the opportunity, and he gave it to me, he said “listen, I am actually looking for somebody like you to help me grow my business, but come first to Dubai to have a look and if you like it I will give you a job offer”, I didn’t let him repeat it twice and I landed in Dubai with my brother Davide and our friend Vittorio in August and it was hot….really hot!!!

The city was not what I expected, was much more, it was literally booming, construction cranes everywhere and new buildings coming up all together like mushrooms apart from everything that was already up which had a lot already to offer to both tourists and residents, it was an exciting City to be in, no doubt about it.

After spending a week out and visiting the city and having fun, it was time to go back and I left Dubai with the hope of receiving the job offer as soon as possible and having a chance to come back for good, and it happened. September 2004 I was on my way back to Dubai.

As I said Dubai was on the run new and more exciting job opportunities were just waiting around the corner.  In fact, after spending two years from 2004 to 2006 working for Ital Design as Senior Interior Designer and Project Coordinator and one year in 2007 for Dragoni as Deputy Vice President and Head of Design and Fit-out Department. In 2008 I was offered to be partner and co-founder of a design and build company, I accepted, and in 2008 AIC Design LLC officially formed.

The growth was exponential at that time and in order to meet the projects deadline we had to relay not only to local production but also to expand our supply chain towards the Far East, since we still didn`t have our own production.

It was certainly exciting to deal with different suppliers and have professional experience in Far East but was also frustrating at the same time because we could not have total control of the production and of course, most important, the quality of the final product.

Although, with that kind of company structure, we were managing to deliver various hospitality projects. We were increasingly convinced that we had to have our own interior production company.

And we haven’t thought about it too much, in fact in 2008 we officially incorporated AIC Arredo Industries LLC, an interior manufacturing company with the aim of finally being able to control the project from the early design stage to the final delivery.

Just after few months the production company was operational working on hospitality project in Abu Dhabi, the 2008 global financial crises began to strike hitting our industry by drastically reducing the hospitality project available in the market, but luckily, we managed to “cross the storm” because we were able to quickly change our target by focusing on retail, offices and commercial projects in general.

That strategy allowed us to overcome the crisis and to continue the business successfully, also receiving awards in recognition of the work done, until 2020 when at the beginning of the pandemic the company decided that time had come to end that journey.

Of course, was quite difficult to accept the new reality and let go of a company that we built from zero, but life is like a book of adventure where at the end of any chapter there is always a new one to discover.

And as I have always believed, things happen for a reason, in fact, being free from the preview’s commitment, now I can finally channel my passion by continuing to offer design service and even more I can dedicate myself to something that i want to do from very long time, creation of design objects through in a new startup called Clettico Design, but this is a chapter that is just about to begin.